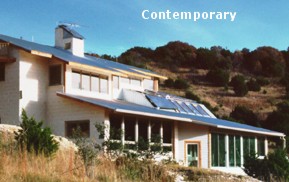 "Conventional" styling at this website simply means that it fits the norms that are well-established in most of the Western world. For the most part, designs that fit into this category have vertical walls and floor plans that are generally rectilinear. There is a tremendous diversity of styles that would be considered conventional, such as Southwestern, Victorian, Bungalow, etc., but rather than sorting all of these styles individually, we have chosen to establish two broad categories: Contemporary and Traditional. 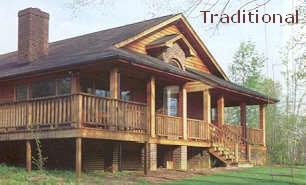 Contemporary styling would have a rather modern appearance, with perhaps daring architectural lines or the use of newer materials. Traditional styling would include many of the styles that we are familiar with, such a Early American, Craftsman, Ranch, and French. All of the plans presented under these categories will have features incorporated that make them uniquely "green."

Disclaimer Of Liability And Warranty
I specifically disclaim any warranty, either expressed or implied, concerning the information on these pages. Neither I nor any of the designer/architects associated with this site will have liability for loss, damage, or injury, resulting from the use of any information found on this, or any other page at this site. Kelly Hart, Hartworks, Inc.

VISIT OUR OTHER WEBSITES: